What is the best time to visit Turkey?

For many years now, many people, tourists and visitors choose to visit Turkey specifically with its beautiful cities and high-end tourist attractions that are worth a visit, but in your opinion, which times of the year are the best to visit? What are the most important destinations worth getting to know? In this article, you will get to know them.

Visit Turkey at these times

The best time to visit Turkey really depends on what you want to see and do while you're there. The country is full of historical sites, beautiful beaches, and vibrant cities. Here's a look at the best times to visit Turkey, depending on your interests.

The best time to visit Turkey for historical sites is during the period from April to June and from September to October, during these months the weather is much milder than during the peak summer months, so you will be more comfortable exploring all the wonderful ancient ruins and you will also find that hotel rates less through it.

The best time to visit Turkey for the beaches is during the summer months of July and August, as this is when the weather is hotter and the water is warmer, which makes it ideal for swimming, sunbathing, and enjoying all the water sports that the country has to offer. Keep in mind that prices will be higher during this time as well.

The most famous destinations to visit in Turkey

Put in front of you a table and arrange the distinctive places that you must visit in Turkey and get to know them so that you do not feel confused because its attractions are many and you must choose the appropriate places. Here are some of the most prominent:

The Hagia Sophia Mosque is one of the most famous tourist attractions in Istanbul. The mosque was built in the sixth century AD and served as a cathedral for nearly 1,000 years. In 1453, the Ottoman Empire converted Hagia Sophia into a mosque and it has remained one of the most important religious sites in the city ever since.

Hagia Sophia is known for its sheer size and grandeur, as well as its beautiful Islamic architecture. The mosque is also home to some of the world's most famous Islamic art, including the exquisite blue Iznik tiles that adorn the walls of the main prayer hall.

One of the most magnificent palaces in the world, Topkapi Palace is located in Istanbul and was the main residence of the Ottoman Sultans for nearly 400 years. The palace complex consists of four main courtyards, many smaller buildings, and lush gardens. The architecture and design of Topkapi Palace is a stunning example of Ottoman culture and art. 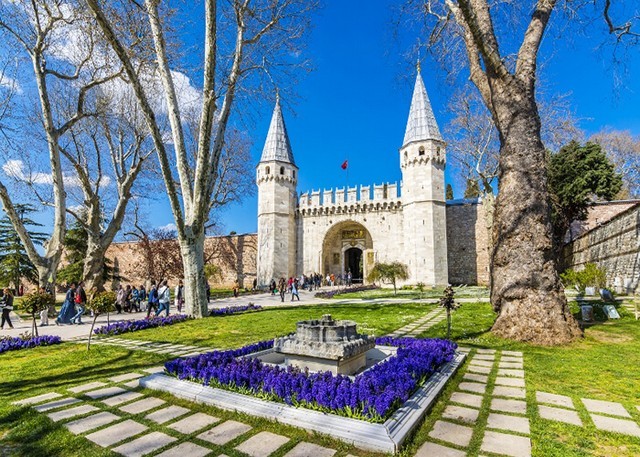 The first part: It is the largest and most formal of the four courtyards and was used for ceremonial purposes and as a reception area for visiting dignitaries.

Part Two: This courtyard was used as a private residence for the Sultan and his family and contains many important buildings including the harem, the Sultan's private apartments, and the Chamber of the Imperial Council.

Part Three: This courtyard was used for audiences with the Sultan, as well as for state occasions such as inauguration and coronation, and it contains many important buildings, including the Audience Room, the Throne Room, and the Ahmed III Library.

The Chocolate Museum in Istanbul is a unique experience that you will not find anywhere else in the world and from the moment you enter, you will be transported into a world of chocolate with all your senses.

The museum is designed to educate and entertain visitors of all ages about the history and production of chocolate. You'll learn about the different types of chocolate, how it's made, and see some of the most famous chocolate brands from around the world.

But a museum isn't just about education, it's fun too! There are interactive exhibits where you can make your own chocolate creations, and taste test different types of chocolate from around the world.

- The Museum of Anatolian Civilizations is located in the historic Ankara Citadel in the middle of the old town, and it is one of the most important museums in Turkey.

- It includes more than a million artifacts from the various civilizations that inhabited Anatolia, dating back to the Paleolithic Age.

- The museum includes an external section with huge stone works from different civilizations.

Rumeli Castle is a fifteenth-century castle located in Istanbul. The castle was built by the Ottoman Sultan Mehmed II before his siege of Constantinople. The three large towers were named after the three sultans who supervised its construction: Mehmed II, Bayezid II, and Suleiman the Magnificent.

The castle served as a fortress for the Ottomans during the Siege of Constantinople and was later used as a prison. Today, the castle is open to the public as a museum.

Some of the features that make it so special are its location, size and history, as the castle is located on a hill overlooking the Bosphorus, which makes it an ideal place for defense against enemy ships and is also quite large, being over 600 feet long and 400 feet wide and lastly, it has a rich history dating back to to hundreds of years.

Uzungol is a long and narrow lake located in the Uzungol Plateau. It is one of the most beautiful lakes in Turkey and a popular tourist destination. The lake is fed by several small rivers and has an area of ​​4.5 square kilometers. The average depth of the lake is about 50 meters.

The main features of the lake are the clear waters, lush vegetation, and attractive wooden houses built on the banks of the lake. Visitors can take boat tours around the lake or swim. There are also many hiking trails in the area that offer stunning views of the lake and surrounding mountains.

This is an overview of the most important places that you must visit in Turkey, and certainly there are dozens of places that are worth your visit, to get to know and see them on the ground and discover their secrets and the most prominent details about them.

Properties for Sale in Turkey Overlooking the Bosphorus.

Apartments for Sale in Turkey With Sea View.

Many Ways to Buy Real Estate in Turkey.

The latest Developments about Real Estate Prices in Turkey 2022.

The Most Important Ways to Get Turkish Citizenship.